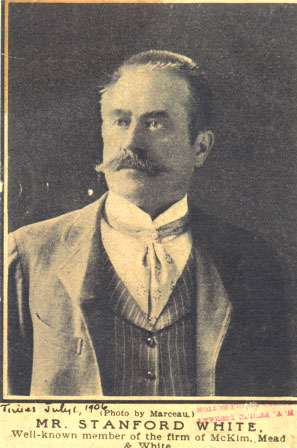 Stanford White, a year before his death at fifty-two (five years after his affair with Evelyn), was the premier architect of the United States. His firm was responsible for the wide popularity of the Beaux-Arts style. Many of their designs in New York City and Newport, Rhode Island still stand today. Less respectably, the married White had multiple clandestine liaisons with chorus girls. Though she nicknamed him “Stanny Claus,” he affectionately called her “Kittens,” and showered her with gifts—wind-up toys, satin kimonos, jewelry, clothes, fox furs, etc.— he also drugged and raped Evelyn when she was only fifteen.